The adoption of fuzzing has resulted in vulnerabilities being found and fixed at scale. Although it is known for a number of its benefits never seen before in other application security testing techniques, advanced users have eventually come across two key questions:

Didn’t have time to tune in or catch his session live at Shmoocon? You can find the replay of the webinar here: https://www.brighttalk.com/mybrighttalk/channel/17668/webcast/390508/replay. You can also read below for the top takeaways from Mark’s talk.

Over the last two decades fuzzing has gained popularity among tech companies as an established security testing technique. In fact, it has been deemed as a best practice by Microsoft and security engineers because it is an excellent technique for testing the security and resiliency of complex software.

The fuzzing market radically changed when an open source solution, called AFL, was released, bringing together many improvements. It changed the market due to one significant capability: coverage-guided generational fuzzing.

Although modern fuzzers today have this capability, it was significant at the time because it found the sweet spot between performance and granularity of coverage with a static-sized bitmap that looked at edge coverage with hit count. This capability allows the fuzzer to see when the target exercises different functionality. It also allows the fuzzer to register new behaviors, which indicates that the fuzzer has reached new code. Reaching new code means new testing opportunities that will allow users to uncover more bugs.

What are the Different Types of Coverage?

In all instances, code coverage is measured in percentages. 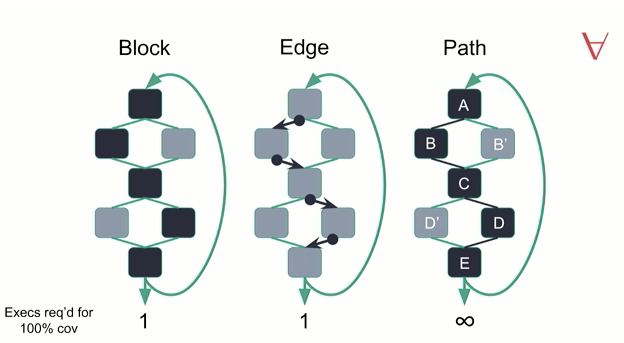 Figure 1: This diagram represents the three different types of coverage. The black blocks represent the information that is stored.

The key tradeoff between these coverage types is performance or storage vs. granularity, hence the reason why we often see edge coverage and rarely see path coverage.

The “Law of Fuzzing”: If It’s Never Been Fuzzed, You’ll Probably Find Bugs…

Fuzzing is an excellent technique for finding vulnerabilities, but what happens when you think you have fuzzed everything and start to see a plateau in results? 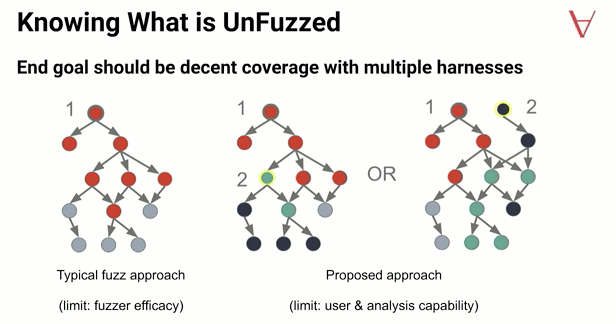 Mark shares that fuzzing the same target differently can surprisingly result in more bugs. Regardless of whether you’re using a modern fuzzer that tracks coverage, he advises pulling coverage information from your existing fuzzing targets to understand what code actually got fuzzed. In his proposed approach, coverage information links inputs to the functionality of the target, and informs the user what to fuzz next. This is particularly helpful when your fuzzing results plateau, which always happens in fuzzing, due to the nature of having finite space to explore and how fuzzers explore it.

This is where automated coverage analysis, such as bncov, comes into play. With bncov, you can…

Mark’s suggested approach is conducted after the fuzzing cycle -- meaning it isn’t tied to any particular fuzzer. If you already fuzz and are struggling with similar questions, this may be an approach for you. For more information on bncov, check out Mark’s blog, “How Much Testing is Enough?”

How Much is Enough?

A commonly asked question about fuzzing is: how much is enough? Organizations such as Google recommend 1 CPU year, which may not always be possible based on product release schedules and various other reasons. Mark shares two answers - the idealistic and the realistic.

“Ideally, we should fuzz every source of input and possible options, all exported functions, internal functions with high complexity (regardless of they’re exposed externally), for all release versions or nightly if your organization releases multiple times a day,” shares Mark.

He further expounds, “Realistically, we should fuzz at least your primary sources of inputs. Having worked with a lot of code, he’s often run into programs that are hard to fuzz. He encourages his viewers to question why something is hard to fuzz, because chances are it’s hard to test in general and therefore isn’t likely to be tested well in the first place.

Irrespective of what’s possible for you, it’s important to keep fuzzing, even if you’ve fuzzed the target before. Inevitably, new bugs are discovered over time, as more functions are added and new mistakes are integrated. Thus, regression testing is key to ensuring the security health of your code. Google’s OSS-fuzz program has shared excellent statistics here. OSS-Fuzz has reported that 40% of their thousands of bugs are regressions.

In his webinar, Mark does an extensive technical deep dive into these topics. If you missed it, but want more details, you can watch on-demand here: https://www.brighttalk.com/mybrighttalk/channel/17668/webcast/390508/replay